DAY 22 (Kennedy Space Center/St. Augustine):
Let me start off by saying that visiting the Kennedy Space Centre was yet another of my trip highlights. Now, I’m not the biggest space nerd, but just making my way around the park was pretty impressive! We even got to see the real Space Shuttle Atlantis and the Apollo Saturn V Moon Rocket! There was even the opportunity to sit in a space shuttle simulator, which I obviously had to try! You are strapped into seats in a replica shuttle and made to feel like you are being launched into space. It’s a really strange feeling, to say the least!

After a five hour stop, we were off to St. Augustine! For those unfamiliar, this beautiful city is the oldest continuously occupied European-established settlement within the borders of the United States. It is also the most haunted city in America! We had a free night to ourselves, so a bunch of us decided to explore the city and ended up booking a ghost tour. If you’re ever in St. Augustine, I would highly recommend the city’s Ghosts & Gravestones Tour! It was such an interesting (…and quite scary!) look into the city’s dark history. By the end of it, we were all freaking each other out, which served some good laughs! Our tour guide, Garrett, and driver were absolutely fantastic and really set the mood!

DAY 23 (Savannah):
Upon arriving in the sublime city of Savannah, we were given a brief walking tour of the city by a local guide. It is the oldest city in Georgia so there is a real deep history behind it, hence the various landmarks and monuments dedicated to historical figures.

Savannah’s Chippewa Square is best known for the famous park bench scenes from the critically acclaimed film Forrest Gump. In the opening shot of the film, a feather floats high above the trees, then sweeps down past the Independent Presbyterian Church and makes its way toward Chippewa Square, eventually landing at the base of a park bench. Tom Hanks, who plays the role of Forrest, sits on this park bench for about 80% of the film telling his life story to anyone who will listen. The bench that Hanks/Forrest sat on was actually a movie prop that has since been placed in the Savannah History Museum. But the location of the bench for the movie in Chippewa Square is still a popular spot for photographs.

After our walking tour, a few of us felt a bit peckish. Still in a ‘Forrest Gump mood’, we decided to try Debi’s/Laurie’s Restaurant. This is the diner where Jenny (played by Robin Wright) worked in the film. It was so lovely having lunch here as they played the film on their television.

That night, I went for a little walk and came across a dessert place – Leopold’s Ice Cream. I later found out that this iconic shop was named one of the top five ice creameries in the world! Yes, it was delicious! I had a chocolate sundae and devoured it. Is there a way ice-cream can be teleported because I really wouldn’t mind one now!

DAY 24 (Charleston):
Today we went for a day trip to Charleston, South Carolina. Our first stop was the centre of Charleston, where we browsed through the city markets and local stores. We had a local guide speak to us about the city’s history and landmarks, and show us some iconic houses. I swear, the houses in this city are simply divine! Wow! What a wonderful city!

We were then off to the beautiful Magnolia Plantation and Gardens. Founded in 1676 by the Drayton family, Magnolia Plantation has survived the centuries and witnessed the history of the nation unfold before it from the American Revolution through the Civil War and beyond. It is the oldest public tourist site in the Lowcountry, and the oldest public gardens in America, opening its doors to visitors in 1870 to view the thousands of beautiful flowers and plants in its famous gardens. We were given a detailed tour of the house, and then invited to roam around the gardens and petting zoo. Words don’t do this experience justice; it was simply marvellous!

DAY 25 (Raleigh):
Raleigh introduced us to our first, true American buffet. For two hours, we ate everything from fried chicken to pizza to fairy floss. It was wonderful (at the time), until it was time for us to go. We were all pregnant with oversized food babies! Aside from the over-rush of food, Raleigh was a lovely city to explore and a place I definitely would’ve liked to have stayed longer at!

DAY 26 (Washington D.C.):
Before stopping at the nation’s capital, we made a brief detour to Arlington’s National Cemetery in Virginia. This is the most famous cemetery in the country and the final resting place for many of our nation’s greatest heroes, including more than 300,000 veterans of every American conflict, from the Revolutionary War to Iraq and Afghanistan. There is also The Tomb of the Unknown Soldier; a tribute to an unidentified American soldier from World War I, which is guarded 24/7. We were lucky enough to watch the changing of the guard at this sacred section.

Once we arrived in Washington D.C., we were given a guided tour around the city by a local guide. It was incredible being able to see the White House and Capital Hill in person!

DAY 27 (Washington D.C.):
This was a very special day for me as it would be my first time riding a Segway! A few of us chose to take a Segway tour around Washington D.C. with the company, Bike and Roll D.C. This was yet another highlight of my tour. I had such a fun day not only riding the Segways but revisiting the sites we visited the night before. It was the perfect way to explore the city! 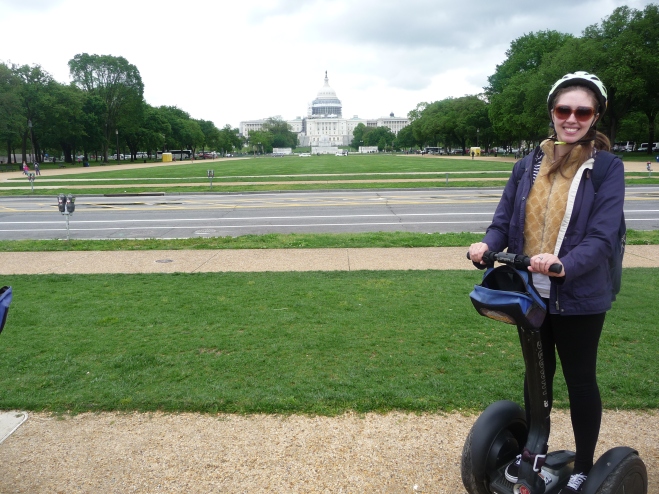 A few of us then ventured off to the International Spy Museum. It’s a museum dedicated to the tradecraft, history and contemporary role of espionage and features the largest collection of international espionage artifacts currently on public display. It was so fascinating!

DAY 28 (Washington D.C.):
Most of today was spent at Washington D.C.’s Smithsonian zoo. It is one of the oldest zoos in the United States, and as part of the Smithsonian Institution, does not charge admission.

Later that day, we headed off to Georgetown for dinner and returned for Contiki’s inaugural shirt signing. We were all told to purchase a white shirt for each other to sign. It was such an amazing idea because now I have physical evidence of the incredible friendships I’ve made over the past month!

DAY 29 (Philadelphia):
Today was our final tour day, which was very sad. But, that didn’t stop us from making the most of the day! On our voyage to our final destination of New York City, we stopped off at Philadelphia. Our first landmark stop was the ‘Rocky steps’!

We then made a quick stop at the Liberty Bell, followed by a good ol’ Philly Cheesesteak at an authentic Philadelphia sandwich shop. The verdict? Absolutely delicious!

We were then off once again, but now, it was our final stop. It was so sad having to say goodbye to my new family; however, we caught up with each other over the next week as most of us were staying for a few extra days. New York City is like my second home, so I know it like the back of my hand. I was lucky enough to see the likes of Jessica Lange, Michelle Williams, Jeff Daniels, Charlie Cox, Gabriel Byrne, Michael Shannon and so many others on the Broadway stage just on this trip! Unlike my other visits, I only stayed for seven days. But, like I say time and time again – New York City, I’ll be back!

I will speak more about my experiences with Contiki in another post, but I will leave you with this comment – it was the best five weeks of my life!

Thank you, Contiki. I couldn’t have done it without you.

* All images are my own and cannot be reproduced.