It has been exactly one week since I was lucky enough to meet British pop group, The Vamps, and Californian group, The Tide. And, in all honesty, I am still not over it.

It all started when The Vamps made their first (and only) Australian public performance at Westfield Chatswood; a day before their official concert at Allphones Arena. We were also in for an even bigger treat as the boy band’s support act, The Tide, performed for fellow fans/shoppers at the public event.

As a new fan of The Tide, I was super impressed by their acoustic performance. They performed some incredible covers of Walk the Moon’s ‘Shut Up And Dance’ and Justin Bieber’s ‘Sorry’, alongside some original pieces such as the ultra catchy ‘What You Give’. Westfield visitors were even lucky enough to hear the band’s very first live performance of ‘Young Love’, which I fell in love with almost instantly.

With cheers echoing from all three floors of the Westfield building, The Vamps were welcomed on stage. It was rather surreal being so close to them, despite being in a shopping centre. They started their mini set with ‘Rest Your Love’ (currently my favourite song) and then moved on to fan favourites ‘Wake Up’, ‘I Found a Girl’ and ‘Can We Dance’. Now I may appear biased, but I can honestly say that The Vamps put on a heluva good show. Their stage presence is utterly spellbinding.

Following on from these fantastic performances, 200 fans were invited to personally meet The Vamps to get their album signed and have a quick chat. Bradley, Tristan, James and Connor were all so down-to-earth and relaxed; taking the time to speak to each and every fan. 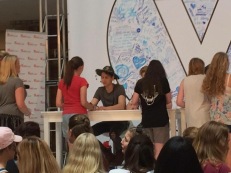 The following day was jam-packed, starting with a meet and greet with the members of The Tide. These guys have the potential to become big. Not only are they great people, but they are so talented and charismatic. Austin, Levi, Drew and Nate were all so open and appreciative of the praise given by their fans. Might I also add that it was absolutely hysterical watching both Drew and Levi try Vegemite.

At 6:30, the fun at Allphones Arena intensified as Tyde Levi took the stage, followed by Australian bands At Sunset and Little Sea (who I have seen perform many times, and absolutely adore!). They were followed by The Tide and the headlining act – The Vamps. Now, I’m not going to go into too much detail but the night was unbelievable. By 10:30pm, I couldn’t feel my legs and had sweat dripping down my body. But, guess what? It was worth it. Oh, and Tristan actually raps! Yep folks, you heard it first here.

The Vamps have just embarked on their world tour, which I wholeheartedly encourage everybody to attend. It truly was a night to remember.

For more information on the world tour, press here.

All images are my own (except for Chatswood Westfield M&G photo). Do not republish without my permission.