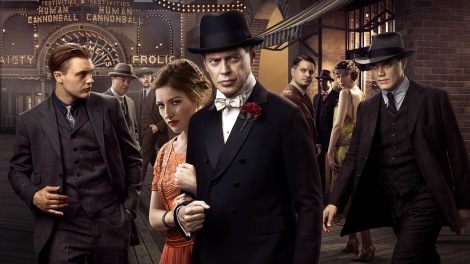 “You can’t be half a gangster”

It only took me a couple of days to wolf down the complete first season of Boardwalk Empire. Do I regret it? Hell no! What’s it about, you ask? Basically, the show centres around Nucky Thompson (Steve Buscemi) and his entrepreneurship (*ahem* … which is corrupt) during America’s alcohol prohibition of the 1920s. With a mix of fictional and made-up characters, we are immersed in a world of money, guns and deals, which results in a helluva lot of shock, laughs and tears.

I’m not going to go into too much detail, but Steve Buscemi is an absolute genius. His portrayal of Enoch ‘Nucky’ Thompson is perfection, as he delves into a ‘character-esque’ debate between ethics and money with help from his trusty ‘lady friend’ Margaret Schroeder (Kelly Macdonald).

Yes, there’s quite a lot of violence, swearing, nudity and sex scenes and references, but let me assure you, it’s all put into context once you watch the show. The cast, directing, cinematography, costuming and set design, among many other extraodinary elements, are absolutely astounding. This is a show you have to see to believe. The first season consists of 12 addictive episodes that you’ll be sure to finish within a week (or maybe a day, if you’re committed?)

So, what I reccomend it? Um … Yeah! (Psst … I’m already having withdrawal symptoms!)

One response to “TV Review: Boardwalk Empire (Season One)”