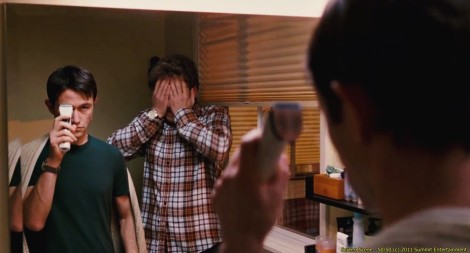 Inspired by a true story, 50/50 is a comedy centered on a 27-year-old guy who learns of his cancer diagnosis, and his subsequent struggle to beat the disease.

When I say the word ‘cancer’, it’s probable that most of you will either squirm, sigh or slowly shake your head. So, you can imagine how you’d react if you went to see a film based on this malicious disease. Yes, I know what you’re thinking, it must be a depressing tale of a person slowly dying, consequently reminding us of how lucky we really are. I must admit, most films about cancer are based around such a premise, resulting in dull characters in a cliched environment. Snoorefest, much?

When approaching Jonathan Levine’s film 50/50 I was fairly apprehensive. I had read reviews saying that it was a rare-type of comedy, but I didn’t exactly know how that would ultimately work. Cancer is usually associated with morbid tales of hospitals, chemotherapy treatment and the effect it has on both the person and their loved ones. How could somebody turn such an idea into a heartwarming comedy?

50/50 doesn’t use comedy as a way of explaining the disease; it is the way in which people react to the word ‘cancer’ that proves to be of comedic value. See, the film is about a normal guy who gets diagnosed with a rare-type of spinal cancer. Obviously, he is shocked and scared but that’s not what the film focuses on. His friends and family provide comedic relief in the way they deal with it. Let me start off by saying, I’m not usually a Seth Rogan fan. I find much of his work to be utterly ridiculous; however, he is essentially what ‘makes’ this film. Rogan’s character is so three-dimensional in that he uses jokes and humour as a way of dealing with his best friend’s deadly illness. He acts as if he couldn’t care less, when in fact, it means everything to him. This is what I found absolutely beautiful about the film. The trials and tribulations of cancer treatment, coupled with the dealing of real-life problems such as relationship breakdowns resulting in an outstanding portrayal of the way somebody deals with the ‘bad’ word, that is cancer.

Like I said, I was expecting a lame excuse for a film dealing with the complexities of cancer; however, I was wrong. I was swept off my feet by how realistic and simple the film was. It didn’t force me to feel a certain way, but did result in a mix of emotions. Joseph Gordon-Levitt is absolutely sublime in the leading role through his ability to subtly portray a ‘normal’ guy with a major problem. Unlike many of his predecessors, he did not overact in the slightest (thank goodness!)

Based on true events, screenwriter Will Reiser went through cancer during his early-mid twenties. Funnily enough, his friend Seth Rogan encouraged him to write the screenplay! I believe that the sincerity of the film boils down to the experiences of Reiser, which he has adapted beautifully to screen. This film will make you want to laugh your pants off while sobbing uncontrollably. It evokes a roller coaster of emotions without draining any hard-earned energy out of you. To be honest, it’s unlike any film I have ever seen!
It’s a heartfelt film that is neither depressing nor offensive, like many may originally believe. I loved it and enjoyed it from start to finish. All the actors work brilliantly together and luckily, there are no ‘flat’ bits.
Altogether, this film was so much better than I thought it would be.
I can’t wait to see it again!